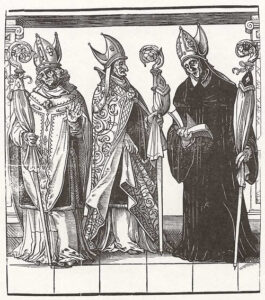 Church hierarchy is a clerical system which has been employed by the institutional Church throughout history, yet contrary to the teachings of Christ and the Apostles (Matt 20:25-26, 1st Peter 5:1-4) . And because there is so much history of the institutional Church employing a worldly hierarchical system, we now have ample evidence to recognize just why Jesus forbid Church Hierarchy.

Such a fundamental departure of Christian precepts  creates a chain reaction of so many other subversive elements which depart from the New Testament pattern as follows:

This leads to a paradigm of ‘clergy performance’ spectated by passive ‘laity audience’, forsaking the New Testament model for interactive meetings.  –1 Corinthians 14:26-33.

Then we have the clergy employing a form of  ‘intermediary practice’ and domination – while the “laity” fails to fully step into their call to ministry.  –1 Timothy 2:5,  Ephesians 4:11-13

Furthermore, such a presumed preeminence of the “clergy class” ruling over the “laity class” enables numerous forms of corruption with no checks and balances.  Again, history provides a surplus of testimony to these facts.

The remnant of true Apostolic descendants  endeavoring to be in line with the teachings of Christ and the Apostles were not, however, in line with the ecclesiastical order of the prevailing Roman Church. Wherefore, the Catholic Hierarchy would brand such believers as “Heretics”,  persecute them to near extinction, obliterate their literature and rewrite their history.

This chain reaction of corruption which grew so excessive with the Roman Church is what finally sparked the Protestant Reformation, which ‘protested’ the abused authority of the Catholic clergy while endeavoring for Church ‘reform’ .

Both sacred and secular realms, then and now, are indebted to the Protestant Reformers for their courageous stand which broke the bond of the oppressive Papal clutch- by breaking loose the power of God’s Word. This was the light which led society out of the dark ages and opened a whole new realm of possibilities.

However, there was yet one fundamental element the Reformers did not really reform, and that was Church Hierarchy. Instead,  a reproduction of a more subtle form of the same institutional paradigm. Protestants employed this new form of Church hierarchy, which also used and abused the power of the state just as the Roman Church had done.

Despite the various freedoms and advancements won by the Reformation, the continuation of Church hierarchy represents a major failure.

So what is the alternative to the conventional hierarchical system?…

When Jesus saw His disciples already attempting to establish their own ‘pecking order’, He explained how that is a worldly way and forbid it among His Church. However, He did not do so without giving an alternative way:

“You know that those who are considered rulers over the Gentiles lord it over them, and their dignitaries exercise authority over them. Yet IT SHALL NOT BE SO AMONG YOU(disciples of Jesus), but whoever desires to be great among you shall be your servant. And whoever desires to be first shall be a slave of all. For even the Son of Man did not come to be served, but to serve, and to give His life a ransom for many.” –Mark 10:42-45

‘Servant Leadership’ was the new order, and this was just as counter-intuitive as it was counter-cultural. Yet obedience to this showed how the priesthood of believers could actually have interactive meetings where everyone ministered to one another with each of their different gifts.  –1 Corinthians 14:26-33

Looking to Jesus as the true Head of the Church does not mean the assembly is devoid of any human leadership. It is just a form of leadership that society is not accustomed to. It is a structure which is non-invasive, equalized and Spirit led. All who are God’s people stand on the same ground. Look how Peter describes this New Testament principle:

“The elders who are among you I exhort, I who am a fellow elder and a witness of the sufferings of Christ, and also a partaker of the glory that will be revealed: SHEPHERD THE FLOCK OF GOD WHICH IS AMONG YOU, SERVING AS OVERSEERS, NOT BY COMPULSION BUT WILLINGLY, NOT FOR DISHONEST GAIN BUT EAGERLY; NOR AS BEING LORDS OVER THOSE ENTRUSTED TO YOU, BUT BEING EXAMPLES TO THE FLOCK; and when the Chief Shepherd appears, you will receive the crown of glory that does not fade away.”   –1 Peter 5:1-5

Notice how Peter instructs the the elders to guide from ‘among the flock’ and not as ‘lords over them’   –and-  leading by ‘example’ and not by ‘executive order’. Also notice how Peter identifies with the elders as ‘a fellow elder’ rather than a ‘superior’, and he does not overstep his equality by ‘commanding’ them, rather he ‘exhorts’ them. There is no element of a chain-of-command hierarchical system in Peter’s exhortation.

Furthermore, Peter addresses some of the typical tendencies to serve by mere obligation, or out of dishonest gain; but he promotes a healthy attitude of serving with eager and sincere ambition worthy of their divine calling.

The word rendered ‘elder’ is translated from the Greek word presbuteros, which simply means – one who is mature and experienced to oversee. And it happens that ‘overseer’ is the word which translates from episcapeo, often rendered as ‘bishop’. So the word ‘elder’ or ‘overseer’ or ‘bishop’ are all interchangeable since they denote to one who is well seasoned with the function of overseeing the Church.

Again, the Church was not meant to be devoid of any human leadership, but to only have the kind of servant leadership we have just seen defined according to the New Testament; as the Chief Shepherd (or Senior Pastor) is none other than Jesus Christ.

These ideals do not come so easily within the context of life’s challenges, but nothing hinders such principles more than a hierarchical system. Even a minister who truly has a servants heart will always be greatly  hindered and at odds with the New Testament precepts as long as one remains in such a system.

The natural inclination is to default to conventional wisdom, but the antidote is obedience to the ways of God.

Such obedience has always come at a great cost for the remnant of believers who endeavored to be aligned with the New Testament pattern, suffering reprisal from the prevailing worldly Church. Yet it was only through their true obedience to God that they endured.

Let us be like those true ones who did not conform to this world, but were transformed by the renewing of their minds.

Main Sources
-Word & Spirit of God, Who Was and Is and Is to come
-John Clark Ridpath- historian, author ‘Ridpath’s Universal History’
-E. H. Broadbent- historian, missionary & author of The Pilgrim Church
-Samuel F. B. Morse- father of Morse Code, author of ‘Foreign Conspiracy’
-Peter DeRosa- Catholic Priest, author ‘Vicars of Christ: ‘The Dark Side of The Papacy’
-Richard Bennet- Christian historian & former Catholic Priest
-John Foxe- historian & author of ‘Foxes Book of Martyrs’
-Bill Mencarow- theologian & historian
-Kenneth Scott Latourette- historian, author of ‘A History of Christianity’
-Henry Fliedner- author of ‘The Martyrdom of a People’ or ‘The Vaudois of Piedmont and Their History‘