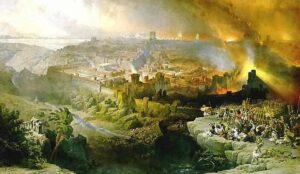 The Apostle Paul refers to the antichrist in his second letter to the Thessalonians in chapter two, which renders the antichrist as ‘the man of sin’ – ‘son of perdition’ who opposes and exalts himself above all that is called God and all that is worshiped, so that he sits in the temple of God showing himself that he is God.

The last part of the above passage has been interpreted by many bible scholars who project that the ‘temple’ referred to is the actual material temple of Jerusalem – which will be rebuilt in the future where the antichrist will sit to be worshiped.

Bible scholars should know much better than to be maintaining such a narrow meaning of  ‘temple’  since there are ample passages in the New Testament which reveal the ultimate meaning of God’s New Testament Temple being His people – the Church:

“Do you not know that you yourselves are God’s temple, and the Spirit of God dwells in you? If anyone destroys God’s temple, God will destroy him; for God’s temple is holy, and you are that temple.”  1 Corinthians 3:16-17

“For we are the temple of the living God; just as God said, “I WILL DWELL IN THEM AND WALK AMONG THEM; AND I WILL BE THEIR GOD, AND THEY SHALL BE MY PEOPLE.”   2 Corinthians 6:16

And besides other similar passages like Ephesians 2:21 or Revelation 3:12, Christ Himself alludes to His own body being the ultimate fulfillment of the Temple when He said, “Destroy this temple, and in three days I will raise it up.”   John 2:19

And if Christ’s body is indeed the New Testament Temple, then what does that make His people, who are called the body of Christ?   “Now you are Christ’s body, and individually members of it.”   1st Corinthians 12:27

The New Testament abounds with such an illustration as just quoted above – God’s people being the body of Christ – Christ’s body being the Temple, thus God’s people, the Church, being the ultimate fulfillment of that material Temple of the prior dispensation, which was just a shadow and type of what was to manifest in the New Testament.

The 2nd Thessalonians passage says nothing about it being the material Temple in Jerusalem, but so many “bible scholars” stretch this to mean “the Temple of Jerusalem” rebuilt in the future. Furthermore, the old temple represents the old system, which is obsolete, and would be a blasphemous act to rebuild what Christ has fulfilled & replaced. The Spirit of prophesy would not validate a rebuilt temple by calling it the temple of God, as it says in the 2nd Thessalonians passage.

One more aspect important to address here is the idea that the antichrist must be a single man. It is easy to get that idea from 2nd Thessalonians 2:4 since antichrist is described in singular form (son of perdition, man of sin, exalts himself, he sits, etc.).

However, we need to remember that prophesy language is not a straight forward style of communication (Num 12:6-8), but is typically more dimensional, metaphorical and symbolic. With this in mind, we should not be quick to presume the antichrist to be a single king, but may very well be a succession of kings, a dynasty, a supreme form of government. Consider how we so often refer to our own government in a metaphorical singular sense: ‘Uncle Sam’, ‘The Man’, ‘Big Brother’.

The letter to the Hebrews describes the High Priesthood as ‘one man’, but we know it’s actually referring to a dynasty of men. Further, the Church of Christ referred to as ‘one body’, yet we reasonably assume this to mean a collective body of several souls. These are just a few examples of why we would not want to take this matter of speech in a wooden-literal sense.

Now back to  Matthew 24:15.
It is very important to understand that Jesus is employing the ‘prophesy language’ of typology. Typology is a foreshadowing of what is to come;  a substitute or type corresponding to the upcoming fulfillment of the very idea projected in that original type; We have just covered how the Old Testament Temple was just a shadow and substitute which found its ultimate fulfillment in the body of Christ – the New Testament Church.

Prophesy language often delivers encrypted messages which allude to another figure and future event besides the literal reference. It is true that many prophesies pertain to more than just the literal matter at the time, but render a dual meaning and theme. Many Messianic prophesies are delivered in this style ~ Psalm 22,  16:10 ~ 2nd Samuel 7:12-16 ~ Isiah 59:16 ~ Zechariah 13:6,  11:12

With such precedence, it it reasonable to infer that  such prophesy language is exactly what Jesus employed in Matthew 24. In verse 3, Jesus receives a barrage of questions in regards to the destruction of the Temple (the actual material Temple in Jerusalem), the sign of His coming and the end of the age.

So with this dual application, Jesus is referring to two different events:

Then Jesus goes on to answer the other questions which also apply to both ‘the destruction of Jerusalem’ in 70 AD – as well as ‘the antichrist reign of tribulation’ during the Church era. This is all prophesied by Daniel’s visions which also employ the same kind of prophesy language as typology, which I explain in The ‘Little Horn’ of Daniel Part 2

But could it still be possible for the Temple of Jerusalem to be rebuilt for the antichrist to stand in? I think so and there have already been plans and preparations made for a rebuilt Temple in Jerusalem, but history has already demonstrated this prophesy of the ‘abomination of desolation’ being continually fulfilled by the Papacy (see – Speaking Great Words and Blasphemy).

The extreme & countless blasphemies of the Popes with their relentless persecutions of the saints certainly more than qualify as “abomination” ; and as a result of such evil, there is “desolation”. Consider the desolation of the dark ages, and though those days were shortened by the Protestant Reformation, the revival of the Roman Antichrist is causing desolation with a fresh new twist in our post-modern age as we know it. 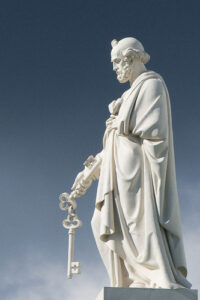 It does not take much perception to notice the striking similarities between the Scribes & Pharisees of Jesus’ time – and the Catholic Hierarchy of the Church era, who have been ‘standing in the holy place’, blocking the way as false intermediaries between God and man. The Greek word antichristos not only means- ‘enemy of Christ’, but also – ‘one who stands in the place of Christ’. Vicarious Christos, being the Latin equivalent of antichrist which transliterates into ‘Vicar of Christ’ – the title claimed by all popes.

Christ Jesus, the true Messiah, is the only figure qualified to stand in the holy place as mediator between God and man (1 Timothy 2:5, Hebrews 9:15, Acts 4:12).

2nd Thessalonians 2:4 speaks of the antichrist “.. .who opposes and exalts himself above all that is worshiped and called God, who sits as God in the Temple of God”

So if the Temple of God is indeed the Church, then we can expect to see the antichrist positioned within Christianity standing in the place of Christ – just as the Popes have been throughout the Church age, and now are being ‘exalted above everything else that is worshiped and called God’ with the Ecumenical-Unity Movement led by Romanism.

~ In the Roman Catholic newspaper ‘Universe’ – the June 27th, 1846 edition quotes the ceremonious installation of the Papal Pontiff with a blasphemous description including the exact wording used in 2nd Thessalonians chapter 2:

“He (the Pope) is borne in the Pontifical Chair, and is placed on the High Altar, a spot consecrated by the actual presence of the body, blood, soul and divinity of the living Christ. He sits on the High Altar using it as his footstool, and enthroned as King, he is adored as God, in the same manner as the consecrated wafer, adored by the Cardinal Princes, who kiss his feet which rest on the Altar of the Supreme. HE SITS IN THE TEMPLE OF GOD SHOWING HIMSELF AS IF HE WERE GOD.”

At this point in time, the one actual geographical ‘seat’ of antichrist that we can be sure of is in Rome ;  for Daniel 7 and history makes that quite clear. Time will tell whether or not this same antichrist power will make its way to sit in the speculated rebuilt Temple in Jerusalem…

Related Articles
The ‘Little Horn’ of Daniel
Discerning the Threads of Eschatology
Time, Times and Half a Time | Time of the Antichrist
What Happened to the Historic Premillennial View and Historicism?
Intro to The Revelation | Remembering Prophesy Language & Prophetic History
The Eucharist Strikes the Gospel
The Rapture