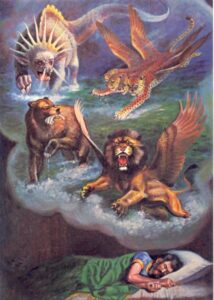 Daniel was given several prophetic dreams & visions; and in the seventh chapter of his writings, he records his dream of the Four Beasts, and the interpretation thereof given by an angel. This vision demonstrates the succession of kingdoms and  is the very framework of all prophesy regarding the violent opposition against the Kingdom of God- waged by the Kingdom of Satan, who is allowed to dominate the earth for a time- until the return of Christ.

~ The first beast, the Lion with Eagles Wings, represents the Babylonian Empire, which portrayed the symbol of the ‘Winged Lion’ – confirmed by archeology and historical manuscripts- ruled from 605 B.C. to 539 B.C.

~ The second beast, the Bear Devouring Three Ribs, represents the Medo-Persian Empire, which involved three major military campaigns (three ribs): One into Lydia, another into Babylon and the third into Egypt; Ruled from 539 B.C. to 331 B.C.

~ The third beast, the Four-Headed Winged Leopard, represents the   Grecian Empire, which, after the death of ‘Alexander the Great’, was divided between four generals (four heads): Cassender, Ptolemy, Lysimachus and Seleucus; Ruled from 331 B.C. to168 B.C.

~ The fourth beast, ‘Different than the other beasts, Dreadful and Exceedingly Strong with Huge Iron Teeth and Ten Horns’ ; and out the ‘Ten Horns’ came another ‘Little Horn’  that rose-up and plucked out three of the ten horns. This represents the Roman Empire which ruled from 168 B.C. to 476 A.D. – which came to be partitioned into ten kingdoms:

“…and the same horn was making war with the saints, and prevailing against them, until the Ancient of Days came (until the return of Christ), and a judgment  was made in favor of the saints of the Most High, and the time came for the saints to possess the kingdom.”  – Daniel 7:21-22

Then, starting in verse 23, the angel interprets the dream; -with historical confirmation in parenthesis:

“THUS SAID HE, (the angel) THE FOURTH BEAST SHALL BE A FOURTH KINGDOM ON EARTH, WHICH SHALL BE DIFFERENT FROM ALL THE OTHER KINGDOMS, (was not the Roman Empire different than the others in it’s constitution, administration and ultimate Papal Caesar?) AND SHALL DEVOUR THE WHOLE EARTH, TRAMPLE IT AND BREAK IT IN PIECES (was not the brutality of the Roman Empire much more cruel than the previous kingdoms, and yet exceedingly more so under the Papal Dynasty with wars, persecutions, massacres, crusades and inquisitions against all so-called “heretics” which were primarily the saints of the Most High?   However, this kingdom has not quite devoured the entire world just yet, but is extremely close).

Verse 24: ‘THE TEN HORNS ARE TEN KINGS WHO SHALL ARISE FROM THIS KINGDOM (the ten kingdoms listed above); AND ANOTHER SHALL ARISE AFTER THEM (the ‘Little Horn’); HE SHALL BE DIFFERENT FROM THE FIRST ONES (is not the Roman Pontiff much more peculiar than its predecessors?), AND SHALL SUBDUE THREE KINGS  (the Heruli, the Vandals and the Ostrogoths were three out of ten kingdoms which were destroyed for opposing the succession of the Papal Caesar).

Verse 25: ‘HE SHALL SPEAK POMPOUS WORDS AGAINST THE MOST HIGH  (has not every Pope claimed, and been proclaimed as “God on earth” among endless other  blasphemous declarations?), SHALL PERSECUTE THE SAINTS OF THE MOST HIGH  (has not numerous amounts of Christians been hounded, tortured, burned at the stake, torn apart by lions, massacred, mutilated, impaled, and destroyed in every heinous way imagined by only the most maniacal minds of the Roman Catholic Hierarchy? And not just during the dark ages, but, in actual fact, more have perished under the ‘disguised modern Inquisition’  within the past century than all the previous centuries combined! Well over a billion throughout the centuries- mounting up to our present time!), AND SHALL INTEND TO CHANGE TIMES AND LAW (did not this dynasty change the calendar, the standard of when a day begins and ends, the Passover/Lord’s Supper time, the Sabbath day, remove the 2nd commandment and usurp the authority of God in countless other ways?).

(It is difficult where exactly to place the 1260 year time-frame in history – as there are various  opinions, but a few propositions may be viewed through this link

‘BUT THE COURT SHALL BE SEATED, AND THEY SHALL TAKE AWAY HIS DOMINION, TO CONSUME AND DESTROY IT FOREVER.

THEN THE KINGDOM AND DOMINION AND THE GREATNESS OF THE KINGDOMS UNDER THE WHOLE HEAVEN, SHALL BE GIVEN TO THE PEOPLE, THE SAINTS OF THE MOST HIGH.

HIS KINGDOM IS AN EVERLASTING KINGDOM, AND ALL DOMINIONS SHALL SERVE AND OBEY HIM.’ ”

Related Articles
The ‘Little Horn’ of Daniel
Discerning The Threads of Eschatology
The Abomination of Desolation – Standing in the Holy Place
Time, Times and Half a Time